Several years back, there was a comedian that landed in hot water for getting into an argument with a female audience member at one of his stand up gigs. I remember a line from one of his routines where he describes his humor as pushing the limits until there is only one person left laughing, so it came as no shock to me that one of his retorts to this audience member involved rape.

A friend and I debated extensively on the subject. She was rightfully horrified by his comments and I wasn't so much defending him (I did like his TV show at the time) as I was defending morbid comedy. My general position was that my weird, gallows humor would leave me laughing at things that were wildly inappropriate. Things like death. Dead baby jokes. So is it a stretch to say rape humor should be off limits?

Hear me out. I cannot think of a single time I've ever laughed at a rape joke. I can think of times when I was working in sexual and domestic violence advocacy where coworkers and I found humor in our jobs. Humor that would probably be inappropriate outside of our group. I was defending gallows humor.

A few weeks ago, I came across this graphic from 11th Principle: Consent!: 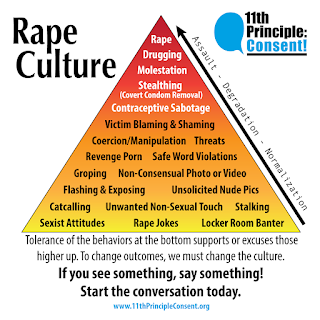 Had I seen this graphic during the debate with my friend, I would have had no choice but to concede.

There are many communities that are reeling from various levels of sexual abuse scandals. We're seeing it in politics, entertainment, faith communities... this is nothing new. These scandals are not new. This type of thing has always happened, but what changes is how we approach victims.

As of late, it feels as though victims, survivors, and their supporting advocates are getting louder. These people have nothing to gain aside from sexual predators being held accountable for their actions.

I see disturbing things happening when these stories come to light, particularly in Catholic circles. I want to talk about this, because it is why I started this project. My growing list of concerns include:

1. Concern that is focused on protecting a man's reputation above victims and future victim's rights.

2. The need to blame the victim or their environment.

3. The focus on modesty and chaste living or even being married as protection from sexual abuse or exploitation.

4. A lack of accountability for the accused and minimization of their actions.


Sexual assault and sexual abuse and even rape are not necessarily interchangeable terms. Sexual predators come in different forms with different patterns, different goals, different prey because sexual abuse or exploitation or assault is not about sex. It is about power. Sexual predators know how to find their prey and how to erase their tracks. They have long known how to be the wolf in sheep's clothing. They know how to isolate, manipulate, and control the narrative using a variety of methods. Here's the domestic violence power and control wheel. While it may have been created to identify the various ways an abusive intimate partner works to control their victim, it gives plenty of examples in how a sexual predator coerces victims into "consensual" relationships and into sex.

Not all predators work the long con. If you want more information on typology, click here. Not all sexual predators act illegally. Predatory behavior does not have to be ignored just because there was no illegal action. If we truly want to see sexual crimes decrease, we must demand accountability. Refer back to the rape culture graphic. The things at the base of the pyramid do a nice job of supporting the behaviors that become increasingly heinous because it allows us to minimize and normalize behavior.

It's easy to just blame something like porn and move on. It is easy to insist that the sexual revolution did this. It is easy to tell our young girls to be modest and chaste and insist that corrects the problem, but the denim jumper with a knitted sweater in a well-lit library during business hours can be assaulted just as easily as the tight micro mini with a tube top at the bar. Clothes do not matter. Different sexual predators prey on women from different backgrounds and with different or no baggage. "Proper religious formation and instruction" cannot protect. We are all sinners and being a sinner is not what makes one an easy target.

This sounds hopeless, and I get why so many feel the need to place blame on what is easier to change (such as a victim's behavior or age, or the community) rather than blame those responsible. It is more difficult to change a sexual predator's behavior because they are able to hide behind our hopelessness. They can issue half-assed apologies, or disappear and reemerge in a new community and find new ways to cover their tracks. But we can stop this by calling out their behavior. By believing their victims. By placing the blame squarely where it belongs: with those that did the hurting.

Rape culture is real. If we truly want to fight against rape, molestation, and violence, we must look at that pyramid graphic and stop allowing any of it, illegal or not.

The next time you feel compelled to comment on a breaking sexual abuse/assault/violence story, think about what you post. Do you want to support the victim? Say "I believe you." Do you want to hold the perpetrator accountable? Say "I am not okay with this and he/she/they needs to be held accountable."

If you need a list of things not to say, message me. I'd be happy to fill your inbox with examples.


Posted by Jess Fayette at 1:28 PM No comments:

Sexual Assault is in the News Again

Every time that there is a scandal involving sexual assault front and center, we are told to wait. Wait for more information. Wait for the evidence Law & Order and CSI has promised us. Wait for a judge or jury to tell us how to proceed.

Wait to ruin this man's reputation until we know it needs ruined.

There is rarely concern for those that come forward. There are many questions: Was there a rape kit? Why is she crying? Why is she not crying? Why was she there? Is it worth going into that line of work? Shouldn't she have thought that through? What is she gaining from this?

There is rarely concern or a desire to help those with stories of the most intimate of crimes to heal.

Instead, we wonder aloud and in comboxes how long a man must repent before we believe him. We wonder how this will devastate his career. We accept the standard apology and use the sliver of good and the false pillar of the community reputation to defend our continued support. We latch on to any good thing we've ever heard about the accused because we don't want to know.

We tell young girls that the boys pull their hair and hurt them because they like them.

We tell young girls to be pretty but do not explain.

We say that boys will be boys and caution our daughters about locker room behavior. We teach them to ignore cat calls and to smile. We tell them, if they are polite enough, it will all be okay.

We ignore that predators are very skilled at knowing their environment. We ignore that they know how to make grandiose gestures that make them seem an unlikely predator. We ignore that we laugh off their fondness for young girls or their tendency to get too handsy. We tell women about their patterns and then say "Don't say we didn't warn you."

We do not hold sexual criminals accountable.

Why do victims not report? Why do they wait years before coming forward?

They are told no one believe them and then they see no one believing others. They see the high esteem in which their attackers are held. They are ashamed. They need to heal.

Why doesn't every survivor get the needed evidence by submitting to a rape kit?

Because they are costly and victims are still sometimes responsible for that cost.

Because they don't always get tested.

Because they are not always available.

Because they do not know where to go.

Because in the immediate aftermath of being violated so intimately by a person you likely trusted, they only thing that makes sense is to wash it away to make it go away and rape kits can feel like the opposite of that.

Because pressing charges puts your career and other things you hold dear at risk.

As friends, family, and advocates standing against these crimes, we need to support the survivors in any way we can and demand the correct treatment for the accused. We need to expect personal accountably and blame where it belongs: with the predator. We need to expect a sincere apology that includes taking responsibility, a focus on the wrong that was done, appropriate punishment and treatment.
Posted by Jess Fayette at 8:55 AM No comments: