Part IV: The Lives of the Saints and Healing

* If you are just now joining in, I've been addressing the subject of the sacrament of marriage and Intimate Partner Violence (IPV). Part I, Part II, and Part III can be found by clicking the links.)

While the last post in this series seemed to be directed towards those in a violent relationship, this post is more for everyone.

As Catholics, we often turn towards the lives of the saints to help find inspiration and strength in living our lives faithfully. Naturally, there are a few saints worth bringing up in our conversation about the sacrament of marriage and IPV. 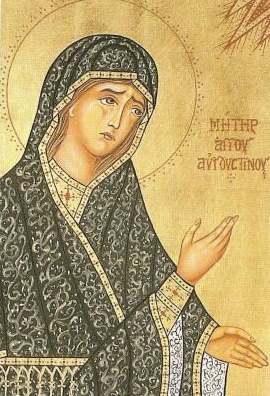 St. Monica is well-known for being the mother of St. Augustine of Hippo, but she lived quite the life herself. At a young age, she was married to a Roman named Patricius. Patricius was said to have a violent temper. While he was not religious, it is said that he respected Monica's commitment to her beliefs, though there seems to have been some level of disagreement over how they would raise their children when it came to religion. Monica prayed tirelessly for the conversion of her mother-in-law as well as her husband, both of whom converted about a year before Patricius' death. 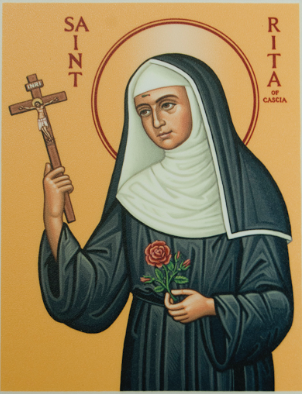 Margherita Lotti was born in 1381. At the tender age of twelve, St. Rita became a wife and mother, despite pleading with her parents to allow her to enter a convent. Rita's husband Paolo was known to have a violent temper, and she suffered physical and verbal abuse at his hands.  He was also known to engage in affairs outside the marriage. In time, Rita's prayers for Paolo and her influence positively effected Paolo. He began to renounce his ways, but in the end he still was killed as a result of his feuding and violent temper. When her sons vowed to avenge the death of their father, Rita prayed for their deaths before they could kill, and her prayers were answered. Before she could enter the convent as she had always desired, she was asked to end the feud that took the life of her husband (and nearly the lives of her sons.)

What We Can Learn From Saints Monica and Rita

Without a doubt the strength of these women is admirable. Today, often the lives of these women are brought up when talking about IPV and solutions for women of faith. Surely, if these saintly women could not only endure years of violence and abuse but then also convert their abusers into men of faith, this is a path we can and should strive to follow. I do not doubt the power of faith. I do not doubt the strength of these women or the seriousness of what they endured. I do have a few things we should consider:
I greatly admire the courage, strength, and faith of saints Monica and Rita. However, I must caution against believing that physically staying and enduring abuse is akin to a shortcut to Heaven. It is okay to need a physical separation. It is okay to take time away to heal and get help for yourself and your children. There is not shame in recognizing that you need support.

Over the past few years, I have become quite fond of Dorothy Day. Day was a founding member of the US Catholic Worker's Movement. The Catholic Worker's movement had a similar grassroots beginning to the domestic violence movement. While Day's focus was on workers, her cause lives on today as a resource for many, including victims of violence. From US Catholic's piece on Catholic Worker communities:

Today the 200 or so Catholic Worker communities scattered around the United States and other countries are grounded in the belief that every human has God-given dignity, just as co-founders Day and Peter Maurin espoused. According to Jim Allaire, webmaster for catholicworker.org, these houses are “beacons of hope in this time of powerlessness.” The movement is significant to the church today, says Allaire, because Catholic Worker communities help “keep an eye on injustice, the poor, and immigration issues.

It is no wonder why these communities are a Godsend for survivors of IPV.

The Process of Healing

What answers do we have here, all things considered? Probably nothing concrete. A decision to leave or stay within a sacramental (or the decision that the marriage is in fact null and void) is not mine to make for someone else. It is my strong belief that the victim of abuse is capable of making this decision, and the help of a spiritual director, counseling, and a support network is vital for an informed decision.

Recognizing that you are in an abusive relationship is difficult. It is even more difficult to know how to proceed. It is challenging to begin to think about your relationship as an abusive relationship, rather than a relationship based in mutual respect and love. It is not easy to accept that the person who is supposed to join their life with yours is abusive. The elements that should exist in the process of healing from IPV, are the same elements I believe we must have to eradicate IPV:

If you have any questions you would like me to answer, please do not hesitate to ask. You can leave a comment, or contact me via email (You can find it listed in the About Me section of this website.)

Other Resources and Posts:

The FaithTrust Institute: Rev. Marie Fortune spends a great deal of time writing about and providing resources to various faith communities about violence. While there are few Catholic-specific resources, there is some really great information to address scripture and violence. (I am not endorsing everything on the site: I invite you to use your own discretion.)

Pregnancy and Domestic Violence: This is a piece I researched specifically on the issues surrounding pregnancy and IPV. Pregnancy is also a volatile time for a victim, and it's important to talk about this issue specifically.

I'm Not a Double Agent, I Just Play One on TV.: A piece that addresses the distrust between domestic violence agencies and pregnancy help centers.

Friends and Family of Survivors