A Tale of Two Shirts

One lavender top that worked well with my maxi skirt but not so well with a particular pair of jeans that I spent the entire first night of my dream job adjusting and regretting, and I was The Girl With Modesty Problems for the rest of the summer.

Let me back up. I was 19. I was working for a summer catechetical program that I still adore. I was Shut the Front Door level excited to have been chosen not only for a camp team, but then to write the modesty talk. This was me:

Then the first night of our first parish assignment, I changed out of my Sunday best skirt to wear jeans for our first high school night, but I grabbed the wrong pair of jeans so there was a bit of skin when I sat. I was really self-conscious about it and could not focus on my teammate's talk for the night. I even sat in the back row. Which is how the older, former teacher saw it and instructed my team leader to talk to me. A week later, my camp boss let me know he was considering switching me over to the Marian talk.

I spent the next three weeks perfecting my "Thoughts, Words, Actions" modesty talk and figured out I was terrible at a capsule wardrobe. #thingsyoudonotknowatnineteen

I wanted my talk to be different, because things like this were happening in parishes: Teens were burned out on the clothing talks. They showed up to swim parties and hang out nights covered from fingertip to toes to joke with us. I get it. I've been over it and frustrated with the dress code modesty rules each and every one of the dozens of times I have heard it as a teen and as an adult.

Telling women to cover and hide parts of their body does not protect men or women. It sets the ground work for assault and victim blaming.

Look. I'm not here to demand women have the right to walk around nude. I'm not vein-popping shouting that men should look away. I'm suggesting clothing is not the problem, and if we continue to play like it is, we are hurting our sons and daughters.

I'd love a cultural shift that turns the fashion industry into something that works for women. Women come in all shapes and sizes. I would love to see silhouettes and lines in clothing reflect that in a more diverse way. That's not really where we go with the modesty debate though, is it? Instead, we filter people into the Always Nude Naysayers, and the Flowy Floor-Length Turtleneckers. We decide to focus on clothes, and ask women to take on the pressure of modesty while our men get it together. Then, we ask what sexual assault victims were wearing when a crime is committed against them.

During the second half of my summer teaching, I was in a better rhythm. I went shopping over the break with my teammate  new-found BFF and found a shirt combo I loved. It was orange! It was long enough to cover my torso! It was in that ridiculous style that I had envied all through high school where you wear a white tank underneath to avoid cleavage! I felt pretty! All things good, right?

Then came the week of the high school boys camp. My BFF and I had a modesty debate with a priest. It was heated but probably the most fascinating conversation I had been a part of to date. I was learning. I was experiencing new things. I was enjoying the heck out of my summer, and didn't want it to end. I was on my way to the chapel one night when my team leader again approached me and asked me to change my shirt. He said one of the high schoolers had asked him to ask me to change. My team leader (seminarian) could not have felt more awkward asking, and I was mortified. It was the worst moment of my life to date. I changed and remembered my team leader's words "At least he was listening to the talks?"

I am no less mortified by the moment all these years later, though for different reasons. I wish I had been better at dressing my body. I wish one of my male coworkers had stood up for me. I wish that I'd had a better understanding of modesty and the concept of being brothers and sisters in Christ. I wish that my Catholic education had better addressed the concept of femininity so that I didn't feel so lost.

I'd always been a jeans and t-shirt kind of gal. I didn't know how to wear the tops and outfits that my peers wore. I didn't know how to dress my body type: I was tall, long-legged, with a long torso and large-chested. (Hence the t-shirt and jeans uniform. ) I was beginning to figure all that out in college. As a grown woman, I see the ways the modesty message I received was flawed. I see the ways I can resolve those issues for my kids. I don't want them to be so stuck on hemlines and custody of the eyes that they don't learn character or the inherent beauty of men and women.

I was reprimanded twice that summer for wearing inappropriate shirts: One that showed the slightest bit on my back and one that supposedly was meant to draw attention to my chest. Nothing was said about the concert shirt I wore repeatedly. The band has a multitude of songs that are misogynistic, including one called "Date Rape." Looking through the photos, that is the one I regret the most. 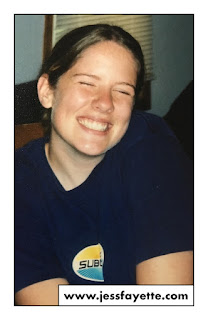 I don't want to be *that* woman. The woman that jumps to the most extreme example every time. I don't read the word "modesty" and counter with "RAPE!" I believe it is a good thing to raise our children to care about others. I think it is a good thing to teach our children how to dress their body types, and to dress appropriately for whatever activity is on the agenda. It is good and healthy to help them find things that allow for movement and comfort. I just don't want them to think that a piece of clothing means my daughter is partially to blame for a crime committed against her or that my son would somehow be absolved from said crime because of what she was (or wasn't) wearing. This line of thinking works in more "trivial" situations also: magazines on the rack, sporting events, dances, the mere act of being at school. Women experience various act of harassment often from the very moment puberty hits. It does not matter how modest the clothing. The lack of respect does not come from immodest dress: the push for modesty is meant to address the lack or respect, and it is lacking.